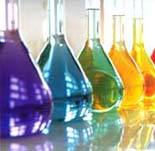 Chlorine gas is a dense, pale yellowish-green, poisonous, gas which can act as a strong oxidizing agent and commonly finds use in disinfecting water and in the production of bleach (Sodium Hypochlorite, NaOCl).

Many methods exist to produce Chlorine gas; this page will focus on a production method involving the oxidation of Chloride ions from a Hydrochloric acid solution by Manganese(IV) Oxide (MnO2, Manganese Dioxide).

Chlorine is toxic and can cause severe respiratory damage and, if inhaled in sufficient quantities, even death. Take great care to avoid breathing Chlorine gas. In case of inhalation, retreat to an area with fresh air immediately.

It is imperative that one perform the reaction outside in an area with plenty of ventilation and away from others. Use only appropriate containers as a reaction vessel and ensure that all joints fit tightly and securely.

Hydrochloric acid will react with Manganese(IV) Oxide to produce Chlorine gas as well as Manganese(II) Chloride and water.

One may use other oxidizers in place of MnO2, such as Potassium Permanganate (KMnO4), but these tend to be more expensive or less common than Manganese Dioxide.

Construct the set up shown below.

A computer-generated graphic showing a chlorine generator similar in design to the above sketch may be seen below. The design the chlorine generators are essentially the same, but the computer-generated version gives a much more realistic depiction of what the glassware pieces look like and shows the use of an addition funnel to control the flow of hydrochloric acid into the flask containing manganese dioxide.

Enlarge Image: With Labels or Without Labels

When ready to begin the reaction, add the Hydrochloric acid to the reaction vessel, then promptly place the stopper in the flask so as to direct any gasses produced out through the connected tubing.

In the main reaction vessel, the Hydrochloric acid will react with the Manganese Dioxide and produce Chlorine gas. Once the reactants are mixed, the chemical reaction will proceed spontaneously until the reaction exhausts the limiting reagent. The rate at which the reaction proceeds depends upon many factors including the concentration of the Hydrochloric acid and the particle size of the Manganese Dioxide. A higher concentration of acid and a finer MnO2 particle size will result in the reaction proceeding at a higher rate.

To gain greater control over the Chlorine production rate, one can optionally use an Addition Funnel, a piece of glassware designed to control the flow of a liquid from a container on top down into a flask placed underneath the funnel. A glass or rubber tube connects the top of the funnel to the flask below so as to allow a smooth flow of liquid by equalizing the pressure in both vessels while the value is open and liquid drains down into the flask. Utilizing an Addition Funnel, one can control the rate at which Hydrochloric acid flows into the flask containing the MnO2 powder, and thus the rate of Chlorine gas production.

After performing the reaction, one might find the reaction vessel stained or discolored from the Manganese Dioxide used in the reaction. If the flasks do not wash clean using ordinary water, the stain can usually be removed by either washing with Hydrochloric acid (to convert any remaining, insoluble, MnO2 to the very soluble MnCl2), or using Potassium Metabisulfite (K2S2O5) which also works well to remove Manganese stains. Be careful of the Sulfur Dioxide (SO2) fumes produced by dissolving Potassium Metabisulfite in water.

To illustrate the oxidizing property of Chlorine gas one can perform an experiment involving a reaction between Iron metal and Chlorine gas.

Iron metal reacts with Oxygen gas present in the air (20% O2) to form Iron Oxide. Given the right conditions, Iron will even burn in an Oxygen atmosphere. In this reaction, Oxygen gas acts as the oxidizing agent, but it is not the only possible oxidizing agent. Chlorine gas will also oxidize the Iron metal in much the same way, forming Iron Chloride in the process.

In the video below, a piece of Steel wool (mostly Iron metal) burns in an open air atmosphere once ignited by a Butane lighter. The steel wool then descends into a beaker filled with Chlorine gas. Once inside the beaker, the Iron can no longer react with the Oxygen from the air but will instead react with the Chlorine gas which surrounds it.
The thick, brown, fumes (of Iron(III) Chloride vapor) coming off the reaction indicate that the Iron is reacting with the Chlorine gas in the beaker. The reaction does not last long because the Iron quickly consumes the small amount of Chlorine gas in the beaker.

A chlorine gas atmosphere will also support the combustion of various hydrocarbons, such as those found in candle wax. Hydrocarbons undergoing (complete) combustion with oxygen gas ordinarily produce water and carbon dioxide as the two byproducts. However, when hydrocarbons are oxidized in a chlorine gas atmosphere, the two products of the reaction are carbon (tiny, aerosolized, particles) and hydrogen chloride gas (HCl), as described by the below chemical reaction.

As seen in the video below, a candle burns in the bottom of a glass beaker, initially filled with air. A few milliliters of liquid chlorine (chlorine in the liquid phase) is poured into the beaker. Immediately, the liquid chlorine begins to boil, producing dense chlorine gas that fills the beaker and displaces the air. Once the air (and thus oxygen) has been displaced from the beaker, only a chlorine gas atmosphere remains. The candle continues to burn in the chlorine gas atmosphere, though now with a noticeable smaller flame and producing a thick, dark-colored smoke (as opposed to the colorless smoke when burning in the presence of oxygen). The dark smoke is actually tiny carbon particles that are carried up, away from the candle, in the stream of hot, less dense HCl vapor.


This page is best viewed at a screen resolution greater than 800x600 using Internet Explorer with JavaScript enabled.